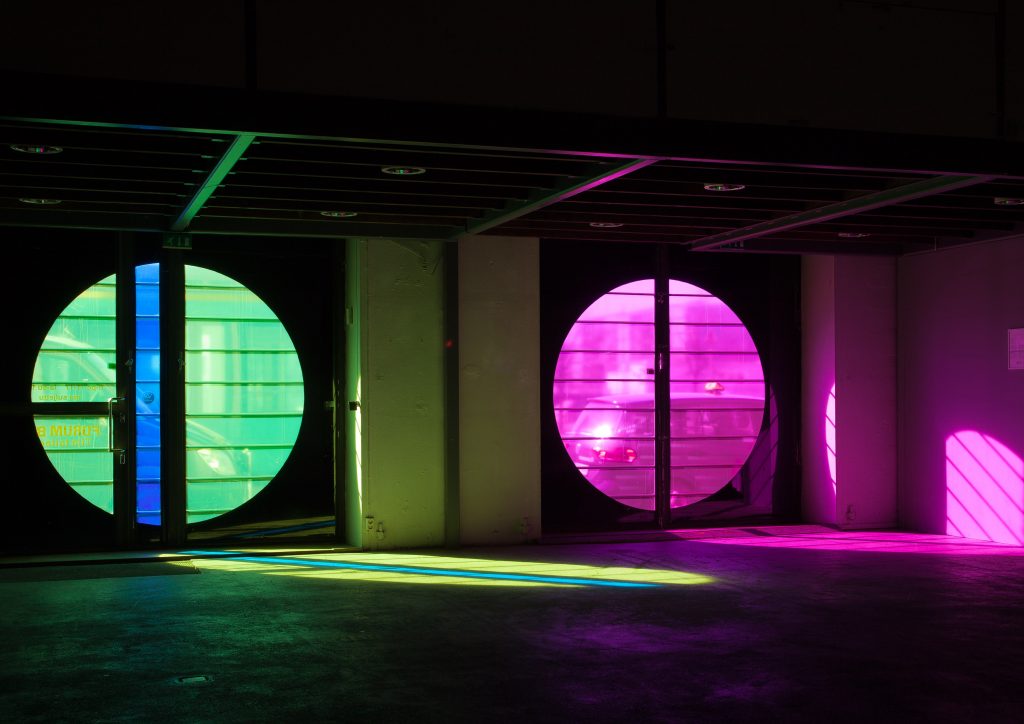 “I wanted all things

To seem to make some sense,

So we could all be happy, yes,

And I made up lies

So that they all fit nice,

And I made this sad world

Calypso from books of Bokonon

The exhibition will feature four video installations: Pyth., Tempest, Two Suns and Relais du Soleil d'Or. The video works are projected from both sides onto semipermeable plastic screens which are hung in air. The images blend at the surface of the paper to form an endless image, which changes randomly and updates in realtime. The video works are collages in which colour surfaces, silhouette characters, places, text excerpts and sound all blend in together. On the walls there are three castings of pigmented plaster. Castings are made partly on site and attached by casting to the gallery walls.

Halo phenomenon: sunlight is reflected from the ice crystals of the atmosphere to form a so-called "side sun".

Harmless untruths: lies that, if used correctly, can be useful.

A cave in southern France, known for its paintings. The original cave was shut from visitors because the exhaled carbon di
oxide was damaging the paintings. A part of the cave can be viewed in a copy, and a larger tourist centre, Lascaux 4, is currently being built.

A choreograph by G.I. Gurdjieff, designed to receive higher energies through complex geometrical series of movements.

1. The title for several of the Armenian-born painter Ivan Aiwasowski's marine paintings.

species of ape, whose only European population inhabits the Upper Rock peak of the Gibraltar mountain. The legend has it that the apes migrated from Morocco through a cave under the strait of Gibraltar and will return to Morocco only if the Brits give up control of the area.

A hotel in Montignac, one kilometre away from the Lascaux cave.

A song composed by the Norwegian Edvar Grieg for the play Peer Gynt.

1. An all-inclusive hotel at Belek, Turkey

2. A Greek goddess who turned into the island of Delos to escape Poseidon's harassment.

A brand of Turkish bottled water.

The day during which day and night are of equal length. This year the vernal equinox is on Sunday the 20th of March.