A wall painting is generally understood to mean a two-dimensional image applied directly to a flat surface to create an illusion. Vesa-Pekka Rannikko - should he ever think of his work as wall paintings - would disagree. Rannikko's wall paintings are never only two-dimensional, not even when they are created on the flat surface of a wall. No, because Rannikko's painting continues through the wall into a dimension that the eye does not see, but which is no less radical for that. The painting runs seamlessly into a hole made in the wall in a way that creates an illusion of flatness which fools the eye. Occasionally, the painting will allow the opening to be seen with colours gathering three-dimensionally around it. Rannikko's painting then moves from the appearance of flatness to the other extreme: it bulges and bursts.

Among his work of recent years, Vesa-Pekka Rannikko has combined the physical brushstroke of a painting with a sculptural shape. His works challenge the usual concept of a picture being flat and rectangular - whether it is a photograph, a video, graphics or almost any other popular form of picture. His works have made me wonder about the general and rarely questioned acceptance of the convention of paintings being flat and rectangular. Why should a flat base particularly suggest itself as the ground for a painting? The theoretician of modern painting, Clement Greenberg provides an answer in his Arts Yearbook article of 1961:

"The Paleolithic painter or engraver could disregard the norm of the frame and treat the surface in a literally sculptural way only because he made images rather than pictures, and worked on a support Ð a rock wall, a bone, a horn, or a stone Ð whose limits and surface were arbitrarily given by nature. But the making of pictures means, among other things, the deliberate creating or choosing of a flat surface, and the deliberate circumscribing and limiting of it. This deliberateness is precisely what Modernist painting harps on: the fact, that is, that the limiting conditions of art are altogether human conditions." (Clement Greenberg, Modernist Painting, Arts Yearbook 4, 1961)

But Greenberg's view does not seem to satisfy Rannikko, who appears to demand a re-examination not only of painting and sculpture, but also of the concept of pictures, and the nature of seeing.

Immediately one starts sculpting a picture, it loses its rectangular flat pictureness; it approaches the three-dimensional, the province of sculpture as Greenberg would have it. From Greenberg,s point of view the chasm that has appeared between picture (painting) and sculpture seems insurmountable. But in his work Rannikko brings together the two- and three-dimensionality of painting and sculpture. His painter's brushstrokes are expanded into three dimensions on the surface of a three-dimensional support, as if to remind us that painting can have an existence that has more dimensions than the purely optical. Seeing the works sculpturally reminds us that shapes and textures can be wrapped around a surface; the shapes and textures of a sculpture are beleaguered by pictures. Rannikko places flat two-dimensional surfaces and three-dimensional forms one above the other to create a reality which intrigues the viewer's eye.

Rannikko's rebellion against pre-determined definitions and methods of art is expressed in various ways in most of his works. A sculpture from 1998 is a construction of spheres, placed in the corner of a room - too low down to be appropriate for a sculpture. In addition, this 'sculpture' has been drawn in pencil. This work, too, suggests a union between the flat two-dimensional and the three-dimensional - in this instance between drawing and sculpture - and further, unites it with the space it's in.

Some years ago, Rannikko cast the structure of buildings, of walls: as if splitting the wall he brought its structure forward by repeating it in a three-dimensional piece. In these works the flat image, the surface of the wall, did not suffice - but neither did the three-dimensional sculpture that was separate from its place of creation. The wall had to reveal its inner structure, the body beneath the surface. A work could not be only surface, nor an object separate from where it was created. It had to have a strong relationship to the space, a relationship deeper than aesthetic suitability.

Rannikko's latest works have grown organically into the space they occupy. In addition to being obviously attractive, presenting an intensity of colour and fruitful forms, the works are also somewhat vexing. They awaken a subconscious urge to scratch away the extra, the superfluous, as if spatters of mud or snow have frozen to the wall, or candle-wax has dripped from a candle. And all the while it is that same candle-wax, drippings of paint, escaped from the original form, that make the works special. They insist the work of art, the object, be redefined. These works don't fit into any of the traditional categories of painting, sculpture, or even installation. They demand to be looked at in new ways. They stain the Modernist cleanliness of the wall, and hint at being abstract objets d'art, yet at the same time they deny their existence as objects. These works have bloomed; they don't keep their original form any more than they stay in their place. They flow down the wall and on to the floor; they push through the wall, become part of it, like cancer cells bursting through their normal boundaries. These works cannot be removed or just wiped off. They are not moved from one place to another. The work is not a separate object but an organic part of the room. 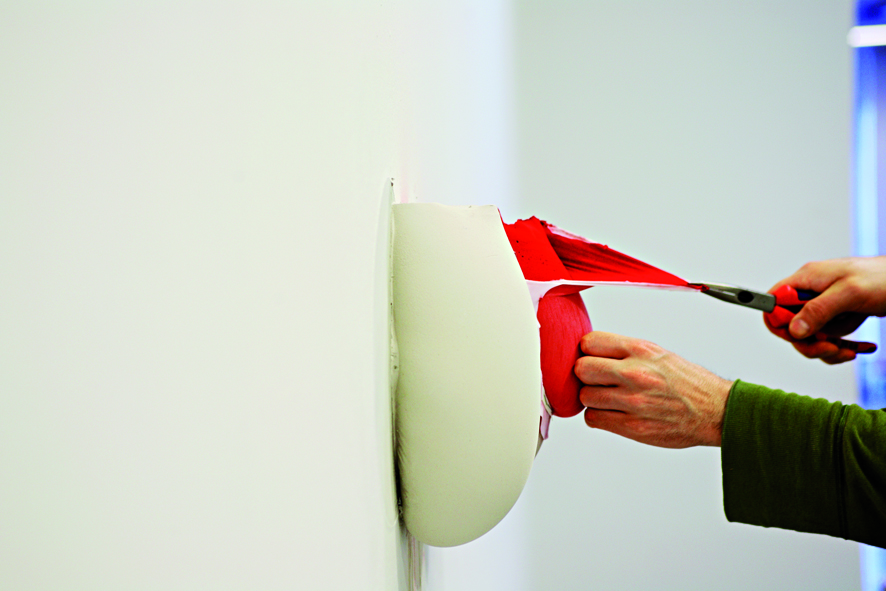 Rannikko's works hint at the process of doing, almost as if they spurned the category of 'finished'. The works can be seen as a bursting forth, an eruption, a falling apart of finished. Are those pots and jugs from antiquity that are being broken? Are the floral arrangements dripping water? Or are those a pair of boxing gloves, dripping with sweat and bodily fluids, that have been thrown against the wall?

Careful observation of the works takes you into various states of mind; it brings forth sensations long buried in the sediments of memory. In Rannikko's work, it is the small marks left by the work process that become significant. Rannikko observes the holes of staples; the narrow, fragile rims of colour that have been left from a casting; the texture of the cast . . . These are the bits that open up the meaning, that destabilise the objectness of a work. The small 'faults' draw the viewer in closer, by confusing a predetermined definition, blurring the perfection of an object that separates it from the viewer.

Rannikko's latest built works are integral to an opening, an emptiness, a hole; to the collapse of predetermined meanings. Holes and 'faults' encourage redefinition through looking, a determination of what is significant taking place in the gaze itself. Such looking - as opposed to the almost violent flattening of a picture - is nourishing.

Perhaps Rannikko's works should be seen as musings on looking: the ability of the gaze to either open or close itself to reality, to the making of a picture of reality. Rannikko's works can be understood as musings on the gaze as a conscious sense of defining, controlling and distancing, even as a violent determiner of reality; and at the same time as a physical aspect, the aesthetic gaze that is characteristic of a painter. As I understand it, aesthetic does not refer to a decorative surface or superficial beauty. The aesthetic gaze is a slow stare, one that is lost in thought, whereby the viewer's unconscious physicality can become part of the picture, and the substance gets a chance to speak - to come alive. Contrary to the conscious gaze - which squeezes and freezes its object into a circumscribed concept of sorts, such as a hole, a painting, a sculpture, a vase - the aesthetic gaze draws the viewer's own physicality into the work. This physicality of gaze refers to the movement, to the rhythmical processes of the body, and to the unconscious mind engaged in looking into the picture. The object of such a gaze cannot be limited to being a flat object, and so the picture blooms.

For the aesthetic gaze, the work is not seen as an object separate from its viewer. The hole in the wall is not merely a hole. In front of our eyes it turns itself around, becomes a fragment of shadow, perhaps, while the wall itself seems to become paper - an illusion. The mind follows the eye along small details. These details open up to the aesthetic gaze as larger than concepts; details do not fit into concepts. They speak an aesthetic language that is alien to concepts. And so the artist, and the viewer who is open to the aesthetic, observes the details, the physical feel of the surfaces, the vestiges of colour and material. These are what speak of meaning. It is the moment of looking and seeing that creates fresh meaning.

Is it meaningful to see Rannikko's work in the category of painting, sculpture or installation? Perhaps we should see them rather as practical studies in the relationship between object, picture and gaze.

Tarja Pitkanen-Walter a visual artist and a professor in the Painting Department of the Finnish Academy of Fine Arts.